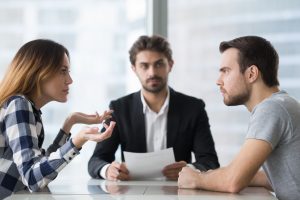 We as family lawyers are, at times, faced with situations where there is a significant power imbalance or inequality of bargaining power between the parties to a financial settlement.  This is becoming increasingly prevalent with the rise of cases involving family and domestic violence, in most instances resultant from the separation, making it difficult for the parties to engage in effective negotiations.

To avoid finding oneself in a position of vulnerability, more and more parties’ are taking steps to enter into a Binding Financial Agreement (BFA).  This type of agreement provides individuals with some certainty as to their financial position moving forward and in particular, in the event of separation.  One of the main protective measures of a BFA is for both parties to obtain independent legal advice prior to signing the agreement, the purpose of which is to mitigate the risk of parties entering into an agreement which is perhaps not in their best interests.

The requirement provided under section 90G of the Family Law Act 1975 (Cth) (the ‘’Act”) requires that a party shall be provided with advice about:

If proper advice is not provided however, it can result in a party raising issue with the validity and binding nature of the agreement and this issue was considered in the in the recent case of Scott & Scott (No. 3) [2019] FamCA 936 (6 December 2019).

The background of the matter is as follows:

The first ground to be considered was whether or not the agreement was binding.

After finding that the husband had established the binding nature of the agreement (i.e. they both signed the agreement; they were each provided with a signed statement by their respective solicitor stating they were provided with the requisite independent advice and copies of those signed statements were exchanged, satisfying section 90G(1)(b)), the Court found that the onus was on the wife to establish that the advice provided to her was, in fact, deficient.

The wife met with her solicitor on two occasions for 20 – 30 minutes and amendments were procured to the agreement by her solicitor.

The wife asserted that her reluctance to sign the agreement related to her claims of duress, undue influence and unconscionable conduct of the husband.

The Court found that these claims did not reflect upon the quality or sufficiency of the independent legal advice provided to her for the purpose of meeting the requirements of section 90G of the Act.

The wife then asserted that, in the alternative, the agreement was signed by her under duress.

The Court referred to the notable case of Thorne & Kennedy which stated:

“To establish duress, the wife had to prove she was the subject of threatened or actual unlawful conduct, which applied illegitimate pressure upon her and caused her to capitulate and execute the agreement against her better judgment”.

The wife declared that the conduct of the husband resulting in her entering into the agreement was the threat of assault or intimidation if she did not do so.  Whilst there was no evidence of the husband making any express threat to assault or intimidate, this was not necessary since the threat of unlawful conduct may be implied, however, if implied the implication must be objectively reasonable.

The evidence provided by the wife was found to be merely an expression of her perceptions, which served her interests in the litigation and was therefore difficult to objectively test.

It was therefore found that the wife was unable to provide sufficient evidence to establish that the agreement was signed as a result of undue influence. Accordingly, the Application was dismissed and Orders for the enforcement of the Binding Financial Agreement were made.

Whilst a BFA is certainly a document that we would recommend it must be noted, that BFA’s are the subject of strict legislative requirements and it is therefore essential that parties obtain proper and informed advice prior to signing same to ensure there is no risk of the agreement’s validity being called into question.

BFA’s are beneficial for parties who are seeking to preserve their financial position.  It not only provides financial certainty for the parties moving forward and, in the event of separation, but it also negates the requirement for parties to be involved in ongoing litigation which is both emotionally and financially draining for them, particularly if one feels they are at a disadvantage.

At Marino Law, our family law team are highly experienced in the drafting of Binding Financial Agreements.  Not only do we take steps to meet with the parties prior to the signing of the Agreement to ensure detailed instructions are obtained, we also provide comprehensive written advice to ensure that the parties are fully informed of their rights and entitlements under the agreement.

All too often, we come across agreements that are poorly drafted and non-compliant with legislative requirements therefore effectively rendering them void, voidable or unenforceable.

We take a careful and considerate approach to ensure that the parties’ best interest are achieved and that all necessary requirements met.

If you are looking at entering into a BFA or would like some further information in relation to same contact one of our family lawyers today who will be able to assist you.