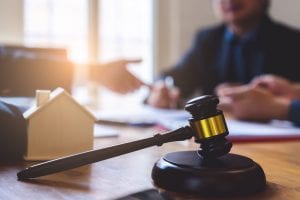 In a recent decision, the Federal Circuit Court of Australia at Lismore was charged with making a decision about whether that particular Court had jurisdiction to determine a Wife’s claim in equity against a property held in the name of her former husband’s parents.  The equitable claim arose because the Wife asserted that there was an agreement (implied or otherwise) between the parties that the property was ultimately that of the Husband and Wife.

The factual background of the matter, reported as Harford & Harford & Anor [2018] FCCA 3267 in general terms is as follows:

After separation the Husband commenced proceedings for property adjustment pursuant to s79 of the Family Law Act (“the Act”).

The Wife responded asserting that the property owned by the Husband’s Father was held on trust for the parties.

Approximately 6 months after commencing proceedings, the Husband was declared bankrupt.  The Husband’s trustee in bankruptcy did not comply with the requirement to make an election to proceed the Husband’s claim within 28 days of receipt of notice by it of the proceedings (having been provided with notice of it on 17 April 2018 and not filing the relevant application until 16 July 2018).

The issue which arose for determination resulting in the decision above, concerned two issues at law:

The case ran on behalf of the Husband’s Father was, at its most basic level, that the Court should dismiss the Wife’s application.

The Wife then ought to commence proceedings in the NSW Supreme Court where the Husband’s Trustee in bankruptcy could then join the proceedings.

He further asserted that as the Act provided jurisdiction only over claims between persons who were married or in a de-facto relationship, then the claim in equity against the Husband’s Father cannot proceed (in that Court).

The Wife’s position is summarized as follows:

In deciding that there was one single justiciable controversy and that the dispute arose from the same substratum of facts, the Court commented:

The resolution of the wife’s claim to an interest in the property is central to the resolution of the s79 proceedings as between the husband and wife.  It is a dispute that will determine the extent of the parties’ financial interests and must be resolved before the Court can properly exercise its power pursuant to s79 of the Act.

After answering question 1 above in the affirmative, the Court then considered whether it ought to exercise the jurisdiction.  It is important to note that whilst having found that the Court had accrued jurisdiction, exercising it is discretionary.

The Court found that it ought to exercise the discretion because:

What can be taken from this decision and the relevant principles is that the asset pool available between parties to a family law dispute is not limited to that which is held in their name.

Parties can and often do successfully assert that assets not held in either of their names forms part of the asset pool. However, in order to do so, it is important to have clear and cogent evidence of an agreement or conduct which implies an agreement and there is no assumption that the Court will accept those assertions.

In order to avoid these types of disputes, we recommend that clear documentary evidence be produced to reflect the terms of agreements between parties to a relationship and (for example) their parents about ownership of assets, their use and occupation (in the case of homes).  Such evidence can be by way of Deed of Agreement, registered mortgages, loan agreements and the like.

A Binding Financial Agreement can also be entered into between parties to a relationship to determine their entitlements to assets which have been contributed by a third party, to avoid the need for litigation.

Being a boutique firm, which practices in both property and family law, the team at Marino Law can provide you with a full service in relation to such agreements and ensure that there is no ability to question whether or not such an agreement exists and the appropriate jurisdiction for the management of any dispute which arises between partners and their family.

If you have not entered into any such agreements and have separated with concerns about how to appropriately prosecute a claim when assets are held in the names of third parties, the expert family law team at Marino Law can work with you to develop a strategic approach to resolution of your family law matter.  Contact us to meet with one of our family lawyers and/or property lawyers on 07 55260157.