A same sex relationship is a relationship between two persons of the same sex, regardless of their sexual orientation.

A couple is generally considered to be in a de facto relationship, if having regard to all the circumstances of the relationship, two (2) unrelated persons whom are not legally married to each other, are living together on a genuine domestic basis. It is important to note that a couple does not necessary need to live together under the same roof to be considered living together on a genuine domestic basis.

Circumstances that should be considered and are regarded to assist a couple or the Court in determining whether a couple are in fact in a genuine de facto relationship include:-

Similar to opposite sex de facto relationships and marriages, same sex couples are able to enter into a financial agreement (previously called a cohabitation agreement) during their relationship to determine what is to happen upon the breakdown of the relationship in respect of the distribution of any joint or separate property and/or the payment of maintenance.

Following the breakdown of the relationship, the parties may be required to finalise the settlement of any property and maintenance (family law) matters arising out of the separation. The process undertaken in resolving any family law matters that may arise from the breakdown of a same sex relationships is governed by the Family Law Act 1975 and the same as a opposite sex de facto relationship and very similar to a marriage.

You do not need to be separated for any particular length of time in order to finalise the settlement of any family law matters arising out of your separation. In fact, it may be beneficial to meet with a family lawyer soon after separation in order to progress your matter in a timely and cost effective fashion, avoiding complications and minimising the impact on your life, children and finances.

It is important to remember that any application for property division or maintenance for de facto (including same sex) couples must be made within two (2) years of the date of separation.

Our team of experienced family law solicitors at Marino Law can assist you in all aspects of the separation process, including the negotiation of a settlement of your financial and parenting affairs or providing representation in family law proceedings.

To find out more about what we can offer, visit our areas of law pages or contact us for a consultation.

Same sex marriage is legal in the following countries:

In 2003, following suggestion that the Marriage Act 1961 in its existing form may have allowed same-sex couples to marry, the Government amended the Act to clarify the definition of “marriage” as being a union between a man and woman to the exclusion of all others.

Additionally, the Government added a further provision to the Act which expressed that foreign marriages between same-sex couples (conducted in countries where such unions are legal) were excluded from recognition in Australia.

Unfortunately, this leaves a difficult state of affairs for same sex couples married overseas. Effectively, as the union is not recognised in Australia, should the relationship breakdown the parties would be required to obtain a divorce in the jurisdiction that they were married. This in itself is likely to cause difficulties, as the parties would be required to fulfil any applicable jurisdictional requirements in that country before obtaining a divorce.

imilar to Australia, such requirements could include a requirement that at least one party must be a resident of, or be domiciled within, that jurisdiction.

If you were married overseas and are now required to obtain a divorce following the breakdown of your same sex relationship, we recommend you contact our experienced same-sex divorce lawyer at Marino Law for advice.

In Australia, same sex couples are not excluded from starting their own families. Ordinarily, children are produced via one of the many assisted reproduction technology options available (in vitro fertilisation “IVF”, intrauterine insemination “IUI”, surrogacy) with the same sex couple opting to use their own genetic material or that of a donor.

In Queensland, if the child is borne through a formal assisted reproductive technology procedure, whether or not the donor is known, the non-birth parent is identified on the birth certificate of the child. The donor is not considered a parent of the child.

The family law team at Marino Law holds the expertise required to assist you in all aspects of your parenting matter.

For more information about the services we provide please visit the parenting section in our areas of law page.

In Australia, the family unit can take different forms. Often within the gay, lesbian, bisexual, transgender and intrasex (“GLBTI”) community, a couple or single person may prefer to enter into a co-parenting arrangement with another single person or couple of the opposite sex, rather than seeking out assisted reproduction options using a donor.

A child borne of a co-parenting arrangement is ordinarily produced using the genetic material of one person from each family group (whether single or couple) through informal (at home) insemination.

The co-parenting arrangement to be put in place after the child is born that deals with the parenting of the child after his/her birth, is often sorted out between the parties themselves.

Co-parenting arrangements are not recognised anywhere in Australia, as a child can legally only have two (2) parents. Subsequently, it is important for the parent(s) to have a good relationship with the ability to work together to make decisions in the best interest of the child.

We recommend that prior to conception of a child born pursuant to a co-parenting arrangement, the intended parents enter into a written agreement that clearly identifies each party’s role and the future parenting arrangements for the child. Importantly, any such agreement should include a mechanism for resolving disputes should any issues arise. Should a dispute remain unresolved, the parties will be required to seek a resolution from the Family Law Courts.

We recommend that you receive advice from a experienced family lawyer prior to entering into a co-parenting arrangement.

The family law team at Marino Law holds the expertise required to assist you in all aspects of your co-parenting matter.

For more information about the services we provide please visit the parenting section in our areas of law page.

Adoption and Fostering a Child

In Queensland, same sex couples are restricted from adopting a child together.

There is no constraint on same sex couples becoming foster parents.

Unfortunately, the team at Marino Law are unable to assist you in respect of any application you wish to make to foster a child.

Marino Law has been named as a Recommended Gold Coast Family and Divorce law firm for several years running on the prestigious Doyles Guide. 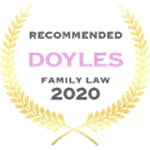