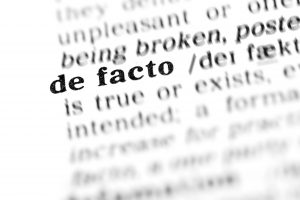 Recently in Cuan & Kostelac, the Full Court of the Family Court of Australia was asked to consider an appeal from a decision of the Federal Circuit Court which declared that parties were in a de facto relationship from April 2007 until late 2010.

The appeal was dismissed, resulting in the declaration of existence of a de facto relationship enabling Mr Kostelac to commence proceedings for property adjustment orders.

(See http://classic.austlii.edu.au/au/cases/cth/FamCAFC/2017/188.html for the full judgment)

The Appellant argued that His Honour Judge Baumann ought not to have found that the parties were in a relationship because:-

The trial judge found that there was a Defacto relationship, taking into account the following matters:-

The Appeal was mounted, challenging the evidence as being sufficient to enable the findings made by His Honour.

Given the discretionary nature of all decisions within the Family Law context, the Full Court cited the High Court authority of Robinson Helicopter Company v McDermott [2016] HCA 22 wherein it was stated:-

The Full Court found that it was open to His Honour to make the findings he did, based on the evidence presented to him, even if other judges may have reached a different conclusion.  In reaching that conclusion the Court relied upon Lynam v Director-General of Social Security (1983) 52 ALR 128 wherein it was stated:-

Each element of a relationship draws its colour and its significance from other elements, some of which may point at one direction and some in the other.  The endless scope for differences in human attitudes and activities means that there will be an almost infinite variety of combinations of circumstances which may fall for consideration.  In any particular case, it will be a question of fact and degree, a jury question, whether a relationship between two unrelated persons of the opposite sex meets the statutory test.

This case confirms that the definition of de facto relationship is imprecise and arguably imperfect.   There are ways to protect yourself prior to entering into a de facto relationship, or during one.   This is by way of a Binding Financial Agreement designed to quarantine and protect pre-relationship assets and define the manner in which contributions are to be considered.

It is vitally important to obtain expert legal advice if you are considering entering into a de facto relationship or are in the initial stages of one, such that steps can be taken to protect your assets.

Conversely if your relationship is at an end and there is scope for arguing that the relationship was not one which falls within the Family Law Act definition, it is again vitally important to obtain expert advice from a Family Lawyer in order to ensure that you take appropriate steps to protect your rights.

The team at Marino Law can provide you with this expert advice and guidance.  Contact our Accredited Specialist in Family Law on 55260157 to discuss your matter further.