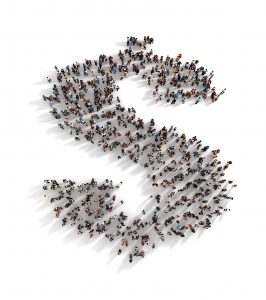 A Brief History of Crowdfunding

Crowdfunding, a method of fundraising by collecting many small contributions from across a large number of investors via an online funding platform, has been a tool for fundraising in the United States since Brian Camelio, a Boston musician and computer programmer, launched a business called ‘ArtistShare’ in 2003. ArtistShare began as a website where musicians could seek donations from their fans to produce digital recordings, and evolved into a fundraising platform for film/video and photography projects as well as music[1].

ArtistShare’s fundraising model while novel at the time was actually very simple. A user could make a donation in a variety of different amounts in exchange for a different ‘reward’ or return on investment. For example, Maria Schneider’s jazz album ‘Concert in a Garden’ was ArtistShare’s first major projection and investors were offered a tiered system of returns for their investment. For $9.95, an investor earned the right to be one of the first customers to download the album upon its release. Investors who donated $250 or more were detailed, in the booklet that accompanied the album, as participants who “helped to make this recording possible”. One particular investor who contributed $10,000 was listed as executive producer on the album. Ultimately, Schneider’s ArtistShare campaign was a huge success. It raised about $130,000, enabling her to compose the music, pay her musicians, rent a large recording studio, and produce and market the album. More rewards-based crowdfunding platforms were launched following ArtistShare’s successful launch, most notably Indiegogo in 2008 and Kickstarter in 2009[2].

Private companies are not designed to raise funds from a large group of shareholders. In fact, two of their key characteristics are that they cannot raise capital from the public and they are limited to having 50 non-employee shareholders.

This is part of the reason why private companies face fewer regulations – they provide very little protection to shareholders. They are not required to hold an annual general meeting, for instance, and do not need to provide their shareholders with financial statements or comment on the company’s performance. Further, a shareholder might find it very difficult to sell their shares in a private company as this may require not only finding a buyer but also getting the board of directors’ approval.

Historically, when a private company requires more capital than 50 non-employees are able to provide, they would restructure their business operations into an unlisted public company. Counting on a wider base of investors and owners, public companies are more heavily regulated, addressing many of these concerns.

While Australia has been markedly slower to adopt crowdfunding compared to the Americans and Europeans, the Commonwealth Government has finally begun to embrace the novel approach to fundraising by introducing the concept of crowd-sourced funding (CSF). Introduced by the Australian Government on 29 September 2017, CSF is a new way for start-ups and small and medium sized companies to raise money from the public to finance their business. Companies typically raise small amounts from a large number of investors. Each investor can invest up to $10,000 a year in a company and in exchange they’ll receive securities in the form of shares.

The Corporations Amendment (Crowd-sourced Funding) Act 2017 was passed last year and amends the Corporations Act 2001, and makes minor amendments to the Australian Securities and Investments Commission Act 2001, to provide a legislative framework for crowd-sourced funding for Australian public companies. Generally, the CSF regime reduces the regulatory requirements for public fundraising while maintaining appropriate investor protection measures. A provider of CSF services must hold an Australian financial services (AFS) licence.  The new fund-raising tool is accessible by many Australian businesses, who are now able to crowdsource up to $5 million a year from retail investors, capped at $10,000 per investor, in return for equity in their company.

While the new legislation was heralded last year as a great start to reforming the fundraising regime in Australia, many crowdfunding proponents argued the requirement to become an unlisted public company excluded the vast majority of Australian businesses and lobbying increased to include private companies in the new regime. As a result, the Commonwealth Government introduced the Corporations Amendment (Crowd-sourced Funding for Proprietary Companies) Bill 2017 (‘Bill’) in September of last year. The Bill is currently before the Senate and was moved for a second reading on the 19th of March.

Once the new legislation passes the Senate with Opposition support as expected, all proprietary and unlisted public companies with annual turnover or gross assets of up to $25 million will be able advertise their business plans on licensed crowdfunding portals, and raise up to $5 million a year to carry them out. As with the public regime, investments are capped at $10,000 per retail investor.

The initiative has the potential to transform fundraising in Australia for private companies, which outside of the small scale offering regime were previously prohibited from raising capital and faced a blanket prohibition on advertising investment opportunities. By allowing crowd-sourced funding, private Australian corporations will be able to advertise through the publication of business plans on approved platforms and fundraise from the general public.

The Bill’s most significant proposal is that companies will be able to raise up to $3 million through a crowd-source funding  portal without the need to have financial reports audited[3]. The limit had originally been proposed as $1 million. With the cost of an audit anywhere between $10,000 and $20,000, many proponents of crowd-source funding had compellingly argued that this requirement could have led to nobody using equity crowdfunding. The new legislation has also exempted users of equity crowdfunding from takeover rules and the 50-shareholder cap that otherwise apply to proprietary companies.

How can Marino Law Help?

In the event that you are considering raising funds via crowd-sourced funding either via a non-listed public company or pending passage of the Bill, a private company, it is important to remember that you are ‘selling’ part of your business to those who contribute funds, which poses a whole range of complex issues including:

Contact one of our experienced corporate law lawyers today to chart the course forward for your crowd-sourced fundraising venture.

[1] A Brief History of Crowdfunding Including Rewards, Donation, Debt, and Equity Platforms in the USA By David M. Freedman and Matthew R. Nutting, 2015, page 1.