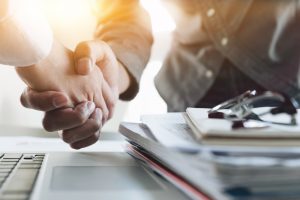 Every person, at some stage of their lifetime, will be required to participate in a negotiation to give effect to a contract, agreement or another type of transaction.

Often, these negotiations occur in an informal manner and without the involvement of legal representation, with both parties believing that until the final terms have been agreed, either party can discontinue the negotiations at any time, without consequence. The following case examples demonstrate that this not true and in some cases, those negotiations can be binding on the parties.

This case involved negotiations between a Buyer and Seller for a service station business and the freehold land on which it was situated. The majority of the commercial terms were agreed, including purchase price, deposit, stock value, settlement date and some ‘matter specific’ terms regarding the fuel tanks and environmental matters.

Negotiations primarily took place by telephone and email and a draft contract was circulated.

The Seller subsequently received a higher offer and sought to withdraw from further dealings.

The Court did not permit the Seller to do so and found in favour of the Buyer, noting that the intention of the parties was to be bound to the agreed upon terms, despite that the formal Contract was not signed and would follow thereafter.

The Seller argued the fact that it was negotiating with other purchasers should be a clear indication that it could not have any intention to be bound to the agreement with the defendant. The Court rejected this argument, finding instead that fact alone was insufficient to override the overwhelming language and conduct of the Seller, which evinced an intention to be bound.

This case was in respect of a Landlord and Tenant, negotiating a proposal for a new lease. A written offer to lease setting out the proposed commercial terms was circulated and negotiated.

Both parties accepted the terms of the written offer to lease, which contained a clause that effectively made the proposal “subject to formal lease documentation being prepared”.

The lease documentation was circulated and further negotiations took place between the parties, before the Tenant sought to withdraw from negotiations because certain provisions of the Lease were unsatisfactory to it.

The Court in first instance found the written offer to lease contained all of the required terms and each party’s conduct in the negotiations demonstrated a “meeting of the minds” sufficient to create a legally binding relationship, despite no formal lease existing between them.

The Tenant appealed on the basis that the offer was “subject to the Lease” and that the terms of the Lease were not fully agreed upon.

The Court of Appeal upheld the finding at first instance, indicating that the written offer to lease contained all of the necessary terms to form a contract and that document was accepted by both parties. The Court concluded that the terms in the Lease that were not present in the offer, as well as the subsequent negotiations, dealings and communications were not inconsistent and did not destroy the earlier concluded (and binding) agreement as set out in the offer to lease.

The Court of Appeal also considered circumstantial evidence to infer the parties’ intentions. The fact the Tenant had been in occupation for a significant time under a previous lease (6 years in total), the parties familiarity through prior dealings and the Tenant’s familiarity with the suitability and capabilities of the land (for the freehold purchase) were all relevant to the Court’s decision.

Masters v Cameron[3] is the leading case on contract formation in Australia. It suggests that if the parties have reached “an agreement to agree” or an agreement that is subject to the preparation or formation of a more formal document, that agreement may fall into one of three categories:

The effect of Masters v Cameron is that unless a party to negotiations has clearly and unequivocally communicated to the other that they do not intend to be bound to the transaction unless or until a formal document has been executed, it is possible for that party to be held to a binding and enforceable agreement, even where the negotiations phase is not completed or where a contract has not been prepared or signed.

In both Stellard and Vantage, the Courts found that all of the key terms of the agreements had been agreed, with that agreement to be subsequently recorded in a more formal contract. In both cases, it was irrelevant that the formal contract contained additional provisions that do not affect the substance of the original agreement.

Stellard’s case is interesting because in most jurisdictions in Australia, legislation exists that requires a contract for the sale of land to be recorded in writing and signed,[4] as well as a requirement for consent to be given before contracts are supplied or signed by electronic means.[5] Regardless, the Court determined the particular email acceptances in Stellard’s case complied with the legislative requirements in Queensland.

The following are recommended guidelines for dealing with any negotiations, regardless of the subject matter:

Marino Law has extensive experience in all contractual negotiations and our team of expert commercial lawyers can effectively guide you through the negotiation and document preparation process, up to the ultimate conclusion of your intended transaction.

For a no obligation quotation and prompt practical advice, please contact one of our expert commercial lawyers today.