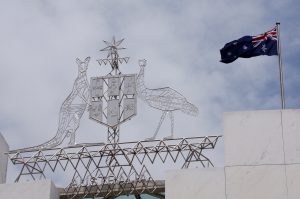 The Bill, amongst other things, would have imposed English language requirements on applicants for citizenship along with a new citizenship test, increased the period applicants would need to reside in Australia as permanent residents from one year to four years before being eligible to apply for citizenship and given power to the Immigration Minister to overrule citizenship decisions by the Administrative Appeals Tribunal.

The Labor Party, the Greens and the Nick Xenophon Team combined forces to use a rarely employed procedural motion to block the Bill, requiring the Bill to be struck from the notice paper for the term of the parliament if it wasn’t passed by the Senate before the close of business last Wednesday night at 7:20pm.

The motion sets out:

Now that the Bill has been removed from the Senate’s notice paper, the government would need to move a motion of its own to reinstate the Bill or re-introduced the Bill to the House of Representatives in a new form. Interestingly, the last time a government lost control of the Senate notice paper was more than 30 years ago in 1995, when WA Greens senator Dee Margetts successfully moved to discharge a government bill relating to the public service.

Despite the Bill not yet becoming law, the Department of Immigration and Border Protection had taken the position that anyone who applied for citizenship after the policy was announced on April 20 was captured by the new rules. As at 28 June 2017, the Department had over 81,000 citizenship applications that had not yet been processed due to the pending passage of the Bill.

Now that the Bill has been formally defeated, all citizenship applications that were being held up until passage of the Bill should begin to be processed under the existing general residency requirement rules, which require applicants to:

While the Bill in its current form is almost certainly ‘dead and buried’, noting that it would be virtually impossible for the government to win a motion to reinstate the Bill, the Liberal government has seen legislation defeated in the Senate previously only to successfully re-introduce amended legislation in the House that ultimately became law. One example is the bill re-establishing the Australian Building and Construction Commission, the watchdog established by the Howard government to stop corruption and improve productivity, which was defeated twice in the Senate before the Turnbull government re-introduced an amended Bill to the House of Representatives following a general election, which ultimately passed the Senate to become law.

With the above in mind, prospective applicants for citizenship are encouraged to apply as a matter of priority in case the government decides to put the Bill, in some type of new form, back on the legislative agenda.

In the event that you are considering applying for Australian Citizenship, please contact one of our highly experienced lawyers for advice today.